Want To Have Strong And Diverse Teams? 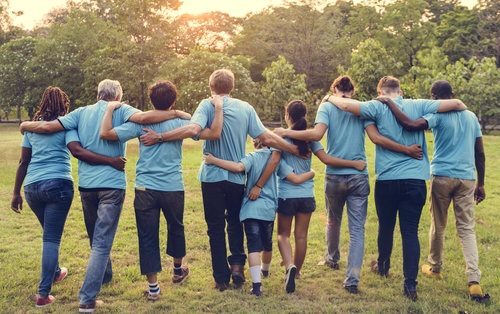 Chances are you already work with some people who think and look different than you, and have very different life experience.  In today’s rapidly changing business landscape, having a diverse workforce is becoming one of the keys to future viability and sustainability.

But having a diverse workplace or team doesn’t automatically lead to an inclusive climate!

According to the Harvard Business Review, “Part of the problem is that ‘diversity’ and ‘inclusion’ are so often lumped together that they’re assumed to be the same thing. But that’s just not the case.   As noted diversity advocate Vernā Myers puts it, “Diversity is being invited to the party. Inclusion is being asked to dance.”

Jim Mecir played professional baseball for fifteen years on many teams.  He learned a lot of valuable lessons about what works, and what doesn’t work, to create a successful inclusive team.

“When you have diverse groups,” said Mecir, “leadership has to create an atmosphere where people know what to expect and allow everyone to get to know each other so they can start to build trust and respect for each other.  Without that, our egos get in the way and we start judging each other.”

“We think that other people should think and act like we do.   If they don’t we often start judging them.  That is a recipe for conflict.”

People are brought up to believe their culture, religion and values are right.  Of course we do.  It is all too common, however, for our competitive nature to make it hard to accept that people who believe differently can still be our equals.   This can be a big problem.

“This is especially true on teams,” said Mecir.  “The only way a diverse team can succeed is for leadership to step in and help educate and build relationships.  To make it clear that each person’s differences are an advantage to the team, rather than something that should be suppressed or put down.”

Mecir first experienced real diversity when he was drafted to play professional baseball.  After his first minor league season with the Seattle Mariners he was sent to Arizona to attend instructional league, a two-month season where the younger players went for training.  According to Mecir, the league was attended by players from US colleges and high schools, and just as many Latin players signed from places like the Dominican Republic and Venezuela.

The first morning practice went well, but when we stopped for a buffet lunch of sandwiches and fruit, all hell broke loose.  When lunch was called the Latin players got in line, while the American players lollygagged and were the last in line.  By the time the last ten players got to the food there were only a few scraps left.  They saw some of the Latin players with two sandwiches and multiple pieces of fruit and immediately rushed to judgement.  Instead of setting aside their egos and postponing judgement until it was clear what was going on, they assumed that the Latin players were purposefully showing them disrespect by not leaving them any food.

The American players angrily told the Latin players that they took their lunch, but there was little understanding because of the language barrier.  All the Latin players saw was a bunch of angry Americans yelling gibberish at them.  They felt attacked and started yelling back in Spanish.

It was an ugly situation that was escalating.

Luckily, there was a cool-headed Latin player that spoke both Spanish and English.  He yelled for everyone to stop in both languages and then started talking to the American players.  He explained to them that absolutely no disrespect was intended.  That in their countries food was scarce, so everyone would take what they could because they didn’t know when they would get another meal.

That explanation calmed the American players down, and they went on to explain to the Latin players that there would be food at every meal and that everyone should take one sandwich and one piece of fruit so everyone got to eat. Everyone began to get on the same page and the way had been paved to more open communication and understanding.

Mecir believes that this whole situation could have been avoided if management would have taken the time to make sure everyone understood what was expected and how the camp operated.  Even more importantly, realizing that when you put two diverse groups of young men together for the first time, there should be people in place to bridge the communication gap and work towards creating an atmosphere where they could get to know each other and build trust.

Want to build a diverse team so you can have more ideas and perspectives brought to the table?  Make sure you get help understanding who they are and create opportunities for them to interact and get to know each other early on.  Lunches, events, team building workshops – take your pick.  They are not frivolous activities.  They will help bridge gaps and build a desirable climate for everyone to work in so everyone can be more successful!