LISTENING is a Super Power 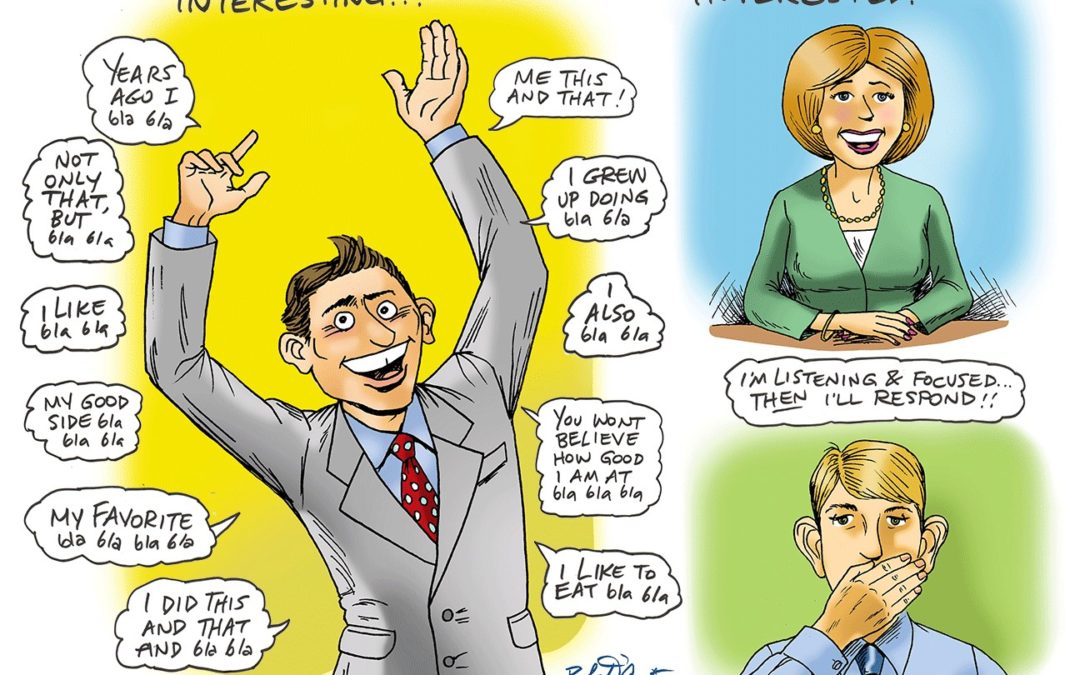 “Most conversations are monologues in the presence of witnesses.”   Mark Twain

Listening is a Super Power!

Another dreaded networking event.  You are talking to someone.  You see them sneaking looks around the room when they think you won’t notice (but you do).  Or, maybe you feel like you are participating in a “who’s the most interesting person” competition.  And those times that no one is really listening to anyone else; it’s like dueling monologues!

At networking events, the goal is to build business by making connections.  The problem is, no one is going to care about your business until they care about you.  When we are genuinely interested in other people and really listen to them, it makes them feel like they matter; what they are saying means something to you.  True listening is a gift.  AND, when you are interested in the other person, YOU become interesting to them!

The Super Power of Listening!

Strong improv ensembles are a team of listeners. Listening is the improviser’s SUPER POWER.  We must hear everything that everyone says on stage or we can blow the scene.  We not only have to listen, but it is essential to pay attention to all of the non-verbal communication and actions, as well. We literally build  the story off of each other’s words and actions.  This kind of listening and paying attention makes it possible to collaborate and create shows and plays from what appears to be out of thin air.

Strong baseball teams are teams of LISTENERS who pay attention to each other’s ideas in meetings and on the field. In a game, you have to be hyper-aware of what is going on around you. You must focus outwardly and be 100% present for the team.

The Canadian Journal Experimental Psychology published a review by Benjamin W. Mooneyham that states, “Studies show that we get bored when our minds wander.  Usually, our minds wander to negative thoughts, which make us unhappy and bored.  If we can stay focused, in the moment, we are happier.”

Next time you attend an event, arrive with the intention of finding out something interesting about everyone you meet. As Mark Goulston, author of Just Listen, tells us that the first key is to stop thinking of conversation as a tennis match. (ie. He scored a point. Now I need to score a point).  He goes on to say,

Hmmm, HE would make a great improviser!

Tip from the Mound:  Jim played with someone who wasn’t a great hitter nor an outstanding defensive catcher, yet he survived in the big leagues for ten years.  It was because he cared, and he listened.  This catcher was a leader, motivator and communicator.  He forged relationships with every pitcher on the team by making them feel valued by listening to them.  They knew that he had their best interest at heart, and they trusted him. With him on the field, the mound wasn’t such a lonely place. The entire pitching staff performed at a higher level during the season because of his leadership.  Does your team feel valued by you?

Tip from the Stage:  Ellen was recently interviewed for an article about the improviser’s super power of listening.  The interviewer shared a situation where a client was yelling at him on the phone about something that wasn’t true. “He had it wrong, and he just kept yelling,” he said.  He ended up losing the client.

He asked, “Do you think improv would have helped me?”.

I asked, “What were you thinking when he was yelling?”

“I kept wishing he would stop yelling long enough to let me get a word in edgewise,” he said.  “He wouldn’t listen.”

In improv, we have to stop the mental chatter in our head, postpone judgment and listen 100% to our scene mates.  We must be affected by what they are saying, and then, respond directly to what they say.

I asked him how he thought the conversation would have gone if he had really listened to the client, quieting or ignoring his own thoughts and responding directly to what he was saying?

People know when we are not listening to them; even on the phone.  And if you aren’t listening, they don’t want to hear what you have to say, especially if they are upset. They want to know that YOU understand their point of view.

Here’s Your Power Challenge:   Next time you go to an event, go with the intention of finding out something interesting about everyone you meet.  As Mark Goulston, author of Just Listen, says, “The first key is to stop thinking of conversation as a tennis match. (ie. He scored a point. Now I need to score a point.)  Instead, think of it as a detective game, in which your goal is to learn as much about the other person as you can. Go into the conversation knowing that there is something very interesting about the person and be determined to discover it.”

Hmmm, HE would make a great improviser!

Whether you build your improvising muscles, accept our challenge or just try one of our tips, be sure to send us a note on your success story!